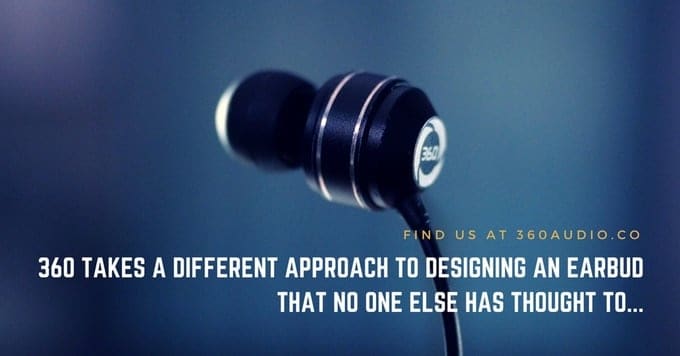 360 has dubbed itself the future of sound technology. Why? The new 360 earbuds have revolutionized the approach taken to create smooth and intricate audio at a portable disposal.

The 360 buds scrapped the traditional approach to making earphones with high-frequency waves contacting the inner ear. Instead the inventors of the 360 have focused their energy on making earbuds that mimic the acoustics of a studio room.

These sleek earbuds are divided into three cavities or chambers. The rear cavity contains shock absorbers to filter out muddy lower frequencies. The inner chamber utilizes binaural recording technology to create an in-ear subwoofer capable of making both low and high sounds bounce off as crisp and clear. The outer chamber delivers the sound through soft rubberized inserts that deliver a recording studio-like experience all within full portability.

By eliminating the muddy lower base and obnoxious high tones, a happy medium is found where all sounds across a broad spectrum become pleasing to the ears. Mixers and musicians commenting on the 360 say that they don’t have to worry about discrepancies between what they hear in the studio and what they present to the public, because the sound remains consistent and clear across all genres of music.

For more innovation in the world of sound, check out the Vi Personal Trainer and Fitness Tracker Headphones.

Your Nose Is the Expert With Wine Awakenings Master Kit

Hagic Review: The only stylish smart watch can last up to 15 days