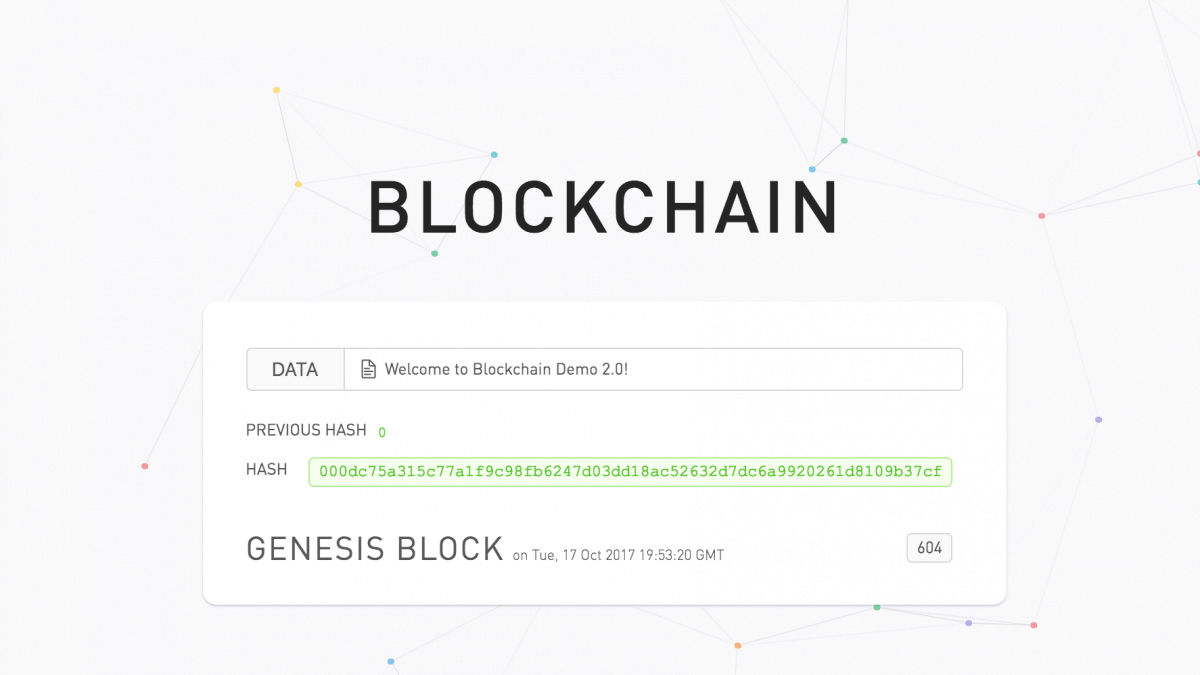 Blockchain Demo: An Invaluable Asset in Unpacking the Mysteries of the Blockchain

Blockchain technology is complicated; the massive public ledger often requires significant prior knowledge to understand, let alone to operate in any meaningful way. While most users of cryptocurrency do not need to know an absurd amount of the logistical components of the blockchain, developers hoping to create their own applications using the ledger must possess a high threshold of understanding of the
protocol.

But even casual users of blockchain applications stand to benefit from an increased understanding of how the financial network functions. In addition to providing coin-holders with the knowledge necessary to make decisions regarding their security and anonymity, comprehension of core blockchain technological concepts could make it possible for a user to eventually transition to mining.

The blockchain is a complicated innovation, though. Terms like “hash data,” “timestamps,” “indexes,” and “nonce” confuse many visitors to the public ledgers. And though online articles can be incredibly informative, many readers lose interest in the bland, boring topic as they read through article after article explaining the blockchain.

In an attempt to educate more consumers on the logistical concerns which lay at the heart of thousands of cryptocurrencies and applications all over the world, Blockchain Demo has created an interactive demonstration of the blockchain. Including tutorials of definitions, functions, and applications of blockchain, this demo is an indispensable tool for the development of substantive knowledge of the blockchain and its most important parts.

When a user opens the initial “Continue Demo” popup on the Blockchain Demo homepage, they are immediately presented with a brief introduction to the blockchain, a “distributed database” which stores financial information on cryptographically-secure units called blocks. Readers are also given a link to a coin transaction demonstration created by the developers on the site and given the option to subscribe for update information.

In the latest version of the demo program, “Blockchain Demo 2.0,” several new revisions make it even easier for novices to turn into blockchain professionals quickly. Notably, a demonstrable P2P interface network, over fifteen new topics for exploration, and a new interface characterize this productive first update to the site.

Blockchain Demo includes twenty-eight topics with explanations for each. The topics typically ascend in difficulty, building on prior knowledge and adding information as users browse through the small lessons.
Perhaps the most impressive aspect of the demo’s interface is the presence of two separate interacting windows.

The first of the two windows is a dark page that includes a brief explanation of the topic being discussed. The second slide, for example, introduces the definition of a blockchain. Additionally, these slides can include a clickable “show code” button used to demonstrate the concept.

The interface also includes a larger window resembling a block on the blockchain. Users can contextualize the lesson within the schema of an actual blockchain component. As the lessons continue, the demo highlights certain parts of the blockchain, such as the timestamp and the hash, providing details on how these components function and contribute to the public ledger.

But the instruction provided by the blockchain demo is not limited to basic component definitions. Readers who continue to only the ninth topic are introduced to the coding information that calculates block hashes. And instruction only seems to become more complicated as the user travels through the sections in their journey to understand the mysteries of the blockchain.

Periodically, the tutorial allows followers to test their knowledge of the blockchain with no-pressure tests and challenges. For example, the twelfth topic, “data mutation,” asks the reader to edit the welcome input initially places in the data input area of the genesis block. These periodic checks are an effective edition to the interface as they allow learners to apply their knowledge to the blockchain they seek to understand.

The mining section of the tutorial will be of extreme interest to many of the users of the demo. From the fourteenth slide on, the concern is primarily the details and processes involved in the mining of coin. From the topic of the code involved in the mining process to the details of the P2P network and implications of a 51% attack, this section equips readers with all the information required to have a basic understanding of mining on the blockchain.

The Blockchain Demo site offers several unique benefits to the curious learner.
First, the progression of concepts is conducive to a fulfilling and effective learning experience. Instead of moving too slowly or immediately jumping into complicated blockchain coding issues, the slides transition at a moderate pace, starting with foundational concepts before building to more complex topics.

Additionally, the aforementioned two-window interface is an invaluable asset in any educational experience. Readers clicking through simple slides are likely to get bored and see a decrease in information retention. With a secondary window to interact with on the blockchain demo, readers are engaged constantly and occasionally tested on their knowledge.

For many, the most alluring prospect of the blockchain tutorial is its inclusion of mining and security tips. Nearly half of the tutorial is dedicated to mining, and one section expressly details the risks and realities of the dreaded 51% attack.
Blockchain Demo seeks to redress an important issue within the cryptocurrency community. Though millions use blockchain technology every day, many consumers still fail to grasp the basic concepts that allow the public ledger to function as well as it does. Understanding how the blockchain works can help cryptocurrency holders to facilitate transactions, understand security and anonymity concerns, and even participate in the important mining process.

The use of a user-friendly interface with interactive components makes blockchain demo an effective means by which users of the blockchain can become well-acquainted to its most important components. And as the age of cryptocurrency continues to develop and evolve, this foundational knowledge among the users that make the system work is essential.

The Innovative and Portable HipStar

analyze and assess your crypto portfolio with ease – cryptagon

Dbrain will Change the way AI is Developed in the Future