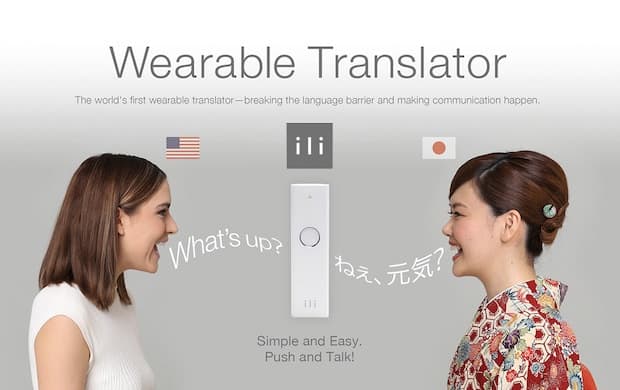 Everyone loves to travel. With the new ili translator you can enjoy it, even more. Read on for all the details

As you probably are one of the sufferers of the never-ending-exhaustion-urban-life disease or hate-boss-hate-everyone disease, a long good break is like a kiss from the heaven. Traveling is fun, you can enjoy the short moment of leisure time with friends and family, and free yourself a little from the workplace tension.

Talk about travel, wherever the place you go, there are always some gaps between the languages. Even with the same English speaking, there are numbers of variation such as different slangs and local disometimeshich are sometime hard to understand, and often mix up.

The true fact is, there are more than 2700 languages and 7000 dialects in the world.

For oversea traveller, language barrier is a huge problem. Aside from only visiting the capital, big cities and places with important landmarks where you can easily find the English speaking locals, walking out of the area is considered a “gesture zone”. Believe me or not, a lot of people in developing countries don’t speak a lick of English, maybe due to lower educational level, the only thing we can do is to use sign and gesture which sometimes doesn’t do much work in complicated sentences.

In order to communicate better, we need a translator. In the market today, there are a number of apps and gadgets that can help us to do direct translation though speaking. Most of them however, require an internet connection in order to work.

Developed by Logbar Inc. , a Japan tech company, ili is a new wearable translator. It requires no internet connection and features a voice-active real-time translation by repeating a phrase back in your language. Ili Translator can now be purchased here.

To provide a better communication experience with people all over the world, the ili translation device offers intuitive translation from just pressing and holding the main button and release it when you are done. Since everything is done offline, this simple ili translator offers a fast and seamless translation in as little as just 0.2 secs as shows in the video above.

As for the current version of ili, it supports English, Spanish, Mandarin and Japanese and more will be added in a near future. This wearable translator only works within U.S. mainland and Hawaii for now. Ili is designed for common tourism requisition such as in the airport, self introducing, troubles solving, and so on. However, the translation errors may occur as its not interpreting some of the technical terms well.

Get yourself an ili translator and get a harmonic and peaceful holiday with no language barriers.