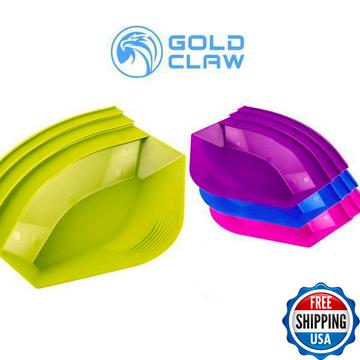 The Gold Claw Starter Special is a complete system that has everything you need to go on a gold-finding adventure that is a fun activity and an intriguing hobby. The Gold Pan is made from indestructible Tritan, a tough copolyester material. and is available in Blue, Green, Purple, Clear, or Pink. The Accessory Kit contains a pocket-sized folding scoop for filling your Gold Pan, a Snuffer Bottle to suction gold from the pan into a vial to keep the newly discovered gold, and an LED Magnifier so you can view the amazing gold and minerals in the pan!

Practice Pay Dirt has 5 to 10 real gold flakes that can be added to muck from a stream or riverbed, and give you a chance to practice getting the gold back. The normal average is five to ten minutes to pan one pan of tiny flakes of gold within muck. The Gold Claw pan does it in less than 30 seconds!

Around 1990, Klint Washburn, an engineer based in Utah, was in college when his father, the Gold Exploration Geologist, called and told Klint his gold machine troubles. That got Klint’s mind working on the question that he would ponder for years: Is there a more effective way to catch gold?

It was 20 years later in 2010, after studying both the science and technique behind gold panning, that Klint asked his dad to join him in turning the inventions Klint had crafted on paper into reality. Together they prototyped numerous amazing machines. Klint was actually designing machines for the professional extraction of gold when he realized that he could use the same engineering principles for a simple hand-held specially-engineered gold pan rather than the traditional pan which is flat, wide, and round. That is how the Gold Claw, a simple but advanced gold panning machine, was born.

In 2012, the entire family went to the gold mining frontier, Alaska, to put prototypes to the test and found success as even the children took part in gold searching. They decided to share this invention with families and people of any age everywhere to make gold panning simple and a way to build memories for an activity which dates back to ancient Egypt.

It took several prototypes, careful engineering, and CAD software to incorporate the technology before the Gold Claw was perfected by Washburn. WhiteClouds, the world’s largest full-color 3D printing lab, was chosen to perfect the Gold Claw design for the new and improved system for extraction of the precious gold. If this is something for you, you may also be interested in the more portable version of the Gold Claw called the Pocket pan. You can see it in action below.

Access Phones on the Go with the ExoMount Touch CD

Removing adsense and media.net and results on affiliate sales