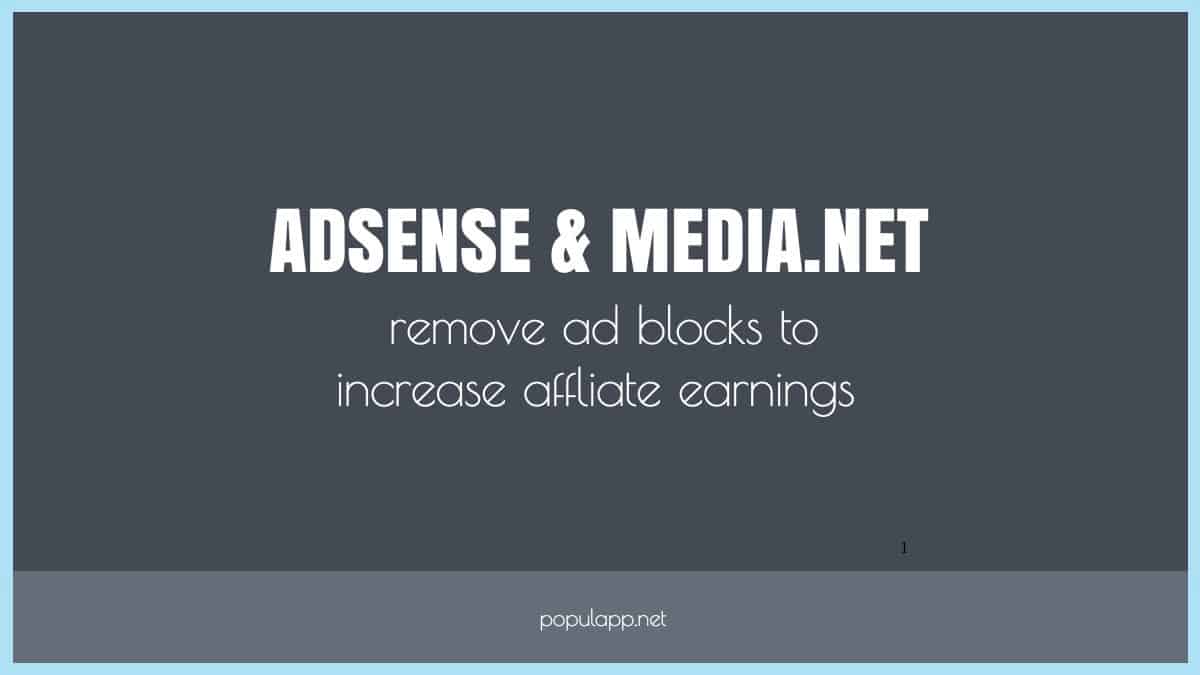 Removing adsense and media.net and results on affiliate sales

Along with running this site, I also run used to own and update muscles.zone; a site where I would post about fitness, bodybuilding and supplements. I was running the site since mid-2014, and the site now gets around 500 visitis per day.

Although I would like to see a higher number in traffic before I use the site for various SEO tests, I decide to go ahead with this anyway. The truth probably is that most of you folks reading this will be in a very similar situation to this; doing tests on a site getting a few hundred or maybe a few thousand visits a day. So just keep the traffic number in mind when reading the rest of this post. More traffic would give us more accurate details, but that doesn’t mean that I cannot draw anything beneficial from running tests, at this stage. So with that being said, let’s move on to topic of today´s post which is;

Can I increase earnings from affiliate offers, by removing adsense and media.net ads on the site?

I have seen this idea mentioned lots of times before – increase affiliate earnings, by removing CPC ads from your site. It does make somewhat sense, in that anyone clicking your CPC ad will be gone from your site, and you just lost them as potential CPA “clients”. Hence, by removing the CPC ads, that same visitor is more  likely to leave my site through a CPA ad and make a purchase, giving me a better return compared to that of an adsense click.

AdSense & Amazon – How to Use them Togehter

Nadya from Living Off Cloud has a very interesting post where she highlights a drop of 20% in AdSense income after implementing a couple of amazon associate links. Read it here.

With around 500 – 600 visits per day, the money made from Adsense does not amount to very much – the same is true for the commission from the affiliate programs used on the site. But I still thought it would be interesting to see if removing CPC ads would result in a significant increase on affiliate earnings. So I decided to give it a go and run the test for one month.

I started this test on August 1st. 2016 where all adsense ads and media.net ads were removed from the site (a total of 6 ads on most pages, combined of three adsense units and three media.net ad units). Note that these were not replaced with something else – they were simply removed. Most reviews posts already contain affiliate links, so no additional offers were inserted. Three of the ads were placed in the posts, top middle and buttom, while the remaining three were in the sidebar and in the header.

If the outcome of this test is superior to that of running a combination of ad blocks with affiliate links, there is definitely an incentive to continue with this model going forward

can I increase traffic
to affiliate offers, by removing adsense and media.net ads on the site?

But what exactly does a superior outcome mean in this relation? In a case like this, it is very easy to get lost in vanity matrixes. Truth be told, I don’t care much for say the click through rate, if it doesn’t equate to a higher profit in the end. Because of this, I will be tracking the

also known as RPM – revenue per 1,000 impressions. By using this number, the difference in traffic figures is accounted for. Now keep in mind the RPM does fluctuate quite radically on a monthly basis, which is a natural result of the (relatively) low traffic figures – it does not take a lot of commission to alter the RPM on a 500 visits / day site.

Anyhow, back to the point again; the final figure that really matters here, is the change in RPM. But let’s start out by taking a look at the traffic stats. Here is the final number for August 2016 compared to July 2016 (click on the image to see it full-size) 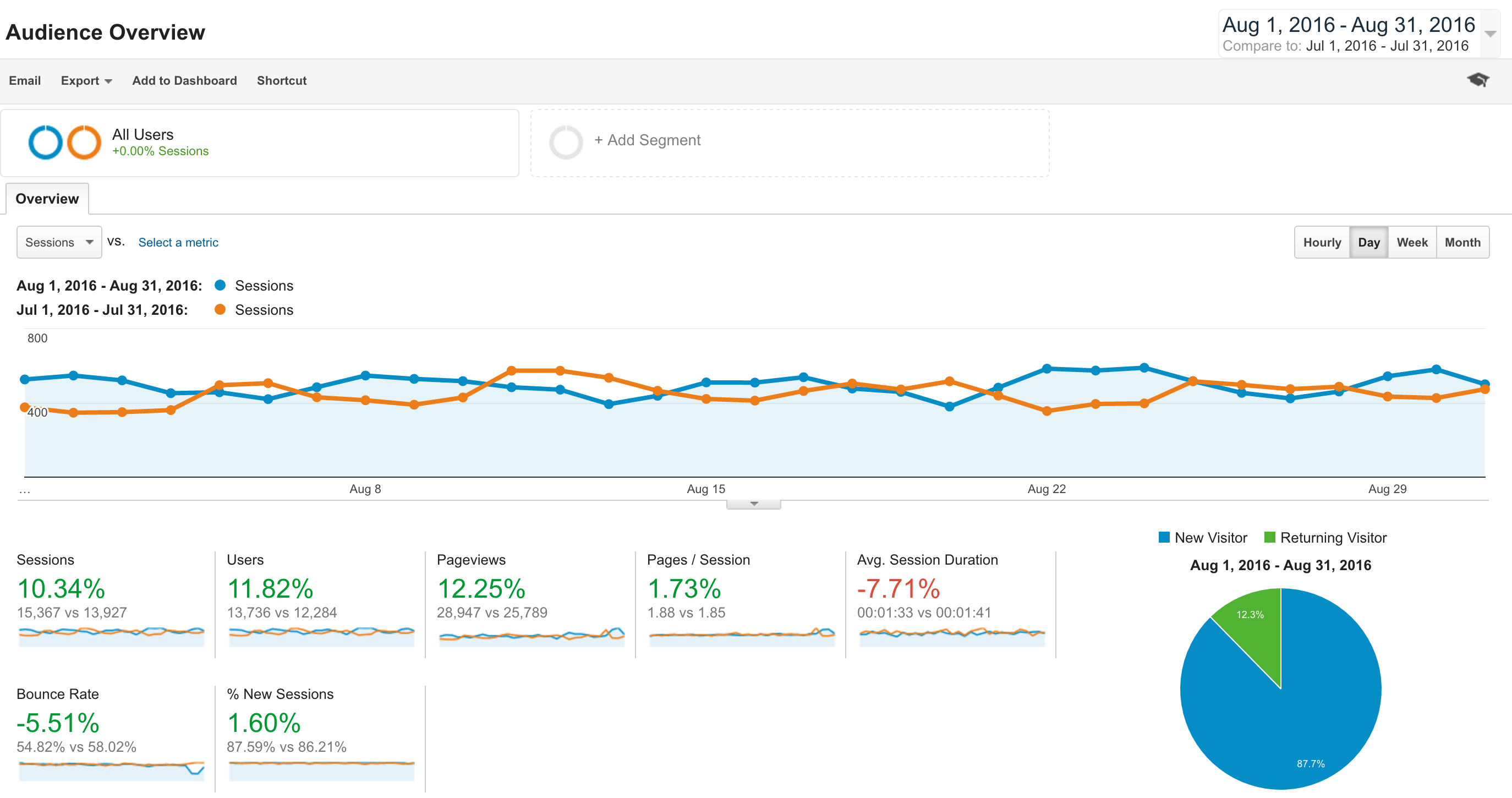 So there is a small uptick in the traffic stats. I haven’t done a whole lot to site in August, in order to keep my focus on this test. Now keep in mind, that the traffic increase in percentage might look significant, but in actual numbers, it isn’t; a 10% increase of 500 is just another 50 visits – which is easy to get from say just a couple of social shares.

So let’s continue to take a look at the events for the month of August compared to July. Events show all affiliate link clicks (click on the image below, to see it full-size). All affiliate links on the site are being tracked, so no matter which affiliate program the links point to, the form part of the total events. There are affiliate links on all supplement review posts, usually in the top and bottom of the post.

So there is definitely an increase in the total events, but just like with the traffic stats, the actual numbers here are low, so it does not take a whole lot, to make a difference that seems more significant than it actually is. Anyhow, lets see how this increase in both traffic and CTR to affiliate offers actually translate into monetary terms.

Now with these details on the table. let’s move on to the stuff we really want to know. Here goes.. 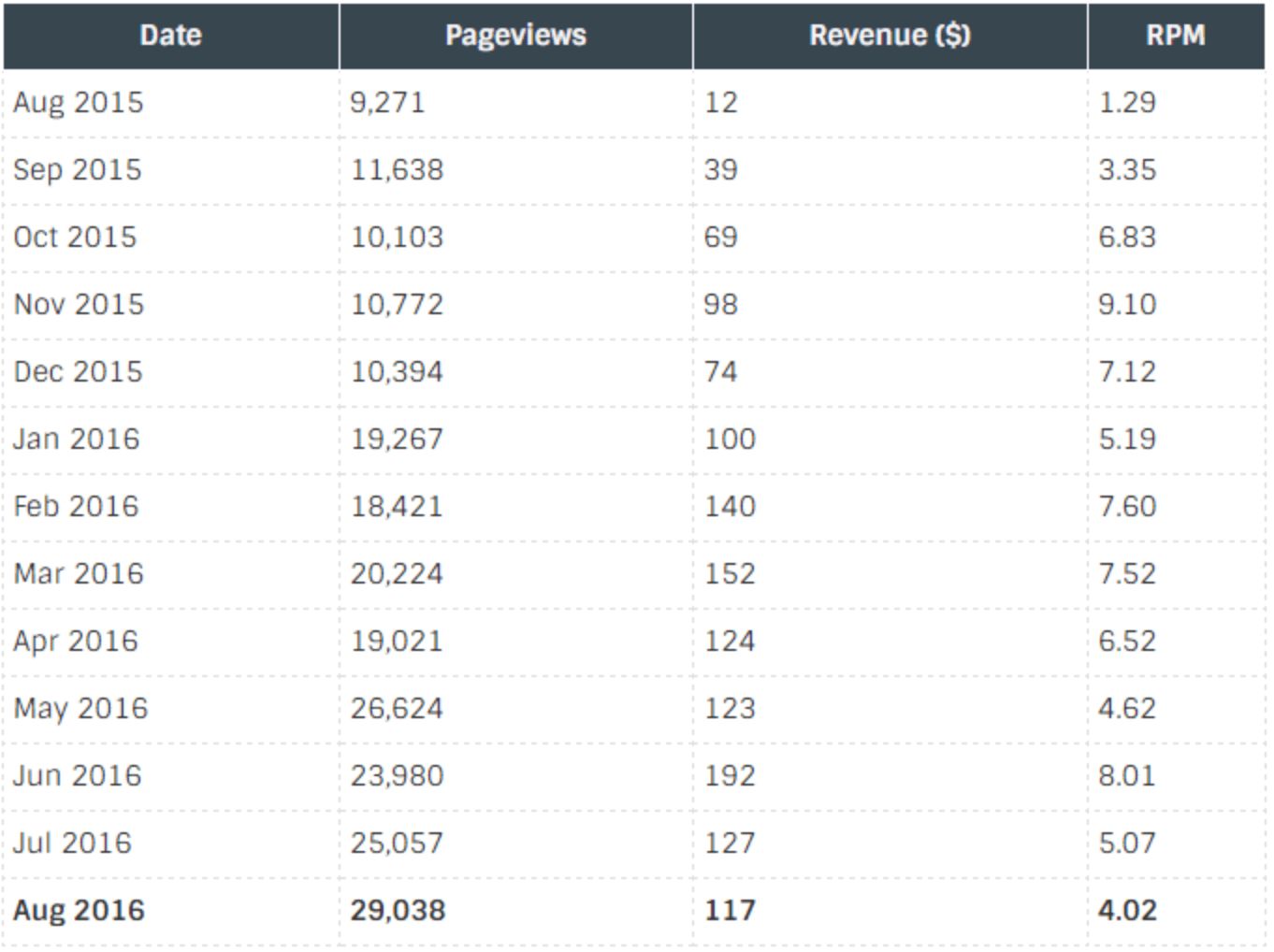 The pageviews and events for August went up a bit, while the revenue actually went down quite a bit. This means the RPM is down – and down to the worst level since September 2015!This is, quite a drop in my book, and for the time being, a clear sign for me, that moving back to a combination of CPC and CPA is the way to go for now. The RPM for August went down to 4.02 and although this isn’t significant relative to the traffic the site gets, it is still the lowest it has been since September 2015 and that is what I base this on, for now.I think a test like this would be a good exercise again at some point in the future when the site gets more traffic. I do however still think, the results are interesting.

More traffic would give us a more accurate result. Because of this, I plan to run a similar case study at some point in the future when the site get’s around 5,000 to 10,000 visits per day.

These results, vague as they may be, should be contemplated with the fitness / supplement industry in mind. Results from a case study like this are not generic; a similar study on a different niche can and probably will produce notable differences from the results observed here. In addition to this, there are an unlimited amount of other factors that can and will affect the outcome (theme, ads, prices, writing style, social proof, age, transparency, etc. ).

Adsense is a popular choice because users can see immediate results. The flipside to this is, that until traffic is significant, the outcome from using AdSense will be limited – very limited! Lots of people argue that it’s simply not worth the time it takes to write a post. The counterargument to this is, that writing a post is a one time job, that has the potential to earn your AdSense revenue for an X amount of time.

In addition to this, it is wrong to do a time vs. income comparison, as the possibility to sell the site is an option as well, meaning that the AdSense revenue can result in 20  times your monthly earnings or more. This is the exact reason why a case study like this, can be justified. Running a case study and this post on it takes time. It is quite the effort compared to the outcome of the test (a couple of $ differences) – However, when the multiplication from a potential sale comes to mind, things become a lot of interesting.

I hope you enjoyed this short case study and got some value from it. I would love to hear your thoughts on the whole thing. Please feel free to share your mind, in a comment below, or send me an email. Have you been running similar tests on your own site, then I would love to hear about that too. If you enjoyed this post, I hope you will take a second to share it one of your social profiles.

If you are looking for thoughts on this very topic, read the posts shared below. They all share some interesting perspectives related to the topic discussed in this post.

Leo from Adsense Success shares some very interesting observations on adsense vs. amazon in this post. Lots of details and golden gems here.

Brent has shared some truly valuable insights over at incomeaddon.com on amazon being superior to AdSense. I won’t spoil it all here, so make sure to give this a read. It is well worth it!

Chris over at UpFuel is a known name in the amazon affiliate space. In t﻿his ﻿post, he highlights 20 tips to help you make money from Amazon. Really good stuff!

Spencer from NichePursuits is yet another skilled individual as an amazon associate. Read 9 tips he use to increase amazon earnings here.

Gael and Mark from AuthorityHacker shared a podcast where they share 41 tips and tricks for the amazon partner program. These guys walk the talk with their health ambition site, so make sure to give this a go!

Crua Clan – The One Tent System

behind the scene on two product launches in the IM space