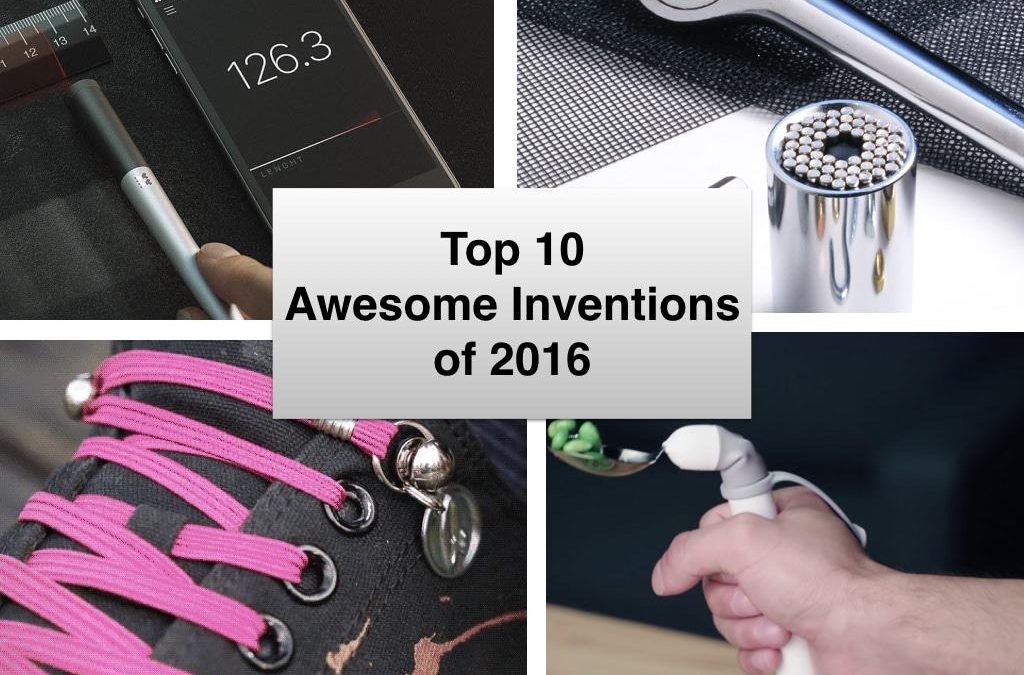 We have came across a wide variety of new gadgets, big or small, here we decided to give you a big list of top useful inventions 2016 all at once. As we have gone through many small but useful gadgets inventions which are too much for a single article, but fit just right in an assorted list.

You may find one or two item useful to you, thus we have put up a link after each summary, feel free to check them out.

To solve a big problem, starts small. We always had a problem of wires tangling in headphone, smartphone charger, or anything that are wired, which may ended up causing fracture on the wires. This universal problem is so common and annoying, yet, nobody able to solve it wisely.

A new on-going Kickstarter project started on 21st December 2016 has provided a neat and tidy way to keep your wires well-organised. It is a set of magnetic clip called iClip that connects wires while minimising user interactions.

It comes with 4 sets for respective uses:

The clip has been tested to compatible with most of the big brands like Apple, Samsung, Huawei, etc. They are having big early bird promotions now starting from as low as $15 and quantities are limited.

We always have the problem of measuring the exact volume of spoon and teaspoon. The traditional multiple sizes tethered spoons is so ugly and outdated.

Earlier on, an useful kitchen gadget funding in the late 2016 in Kickstarter and Indiegogo has raised more than a million dollars in the community.

Designed for all kind of ingredient from viscous, liquid to powder form, polygon is a futuristic cool looking measuring spoon for the future. Since its flat and origami-like, you can then ensure a minimal wastage on your ingredient. The best part, it comes with teaspoon and tablespoon models which allows an intuitive pick-up of 4 different volumes (in TBSP and ml) easily.

How do you clean up your earwax? Earwax, or cerumen, is sticky substance that build up overtime to trap foreign material or dust that fall within your ear canals. Most people use cotton swabs to clean excessive earwax, which may push the solidified waxes further inside.

Recently, a new product with spiral grooved head offers a better way to collect your earwax, a lot more than usual. Simply insert, twist and dispose the head with ease. However since each of us are unique in ear shape/component, this method may not be working for some.

A sticky note without glue and pin. Invented by a company called Tesla Amazing, who had their Kickstarter campaign raised $219,785 dollars in 2015. This special paper-like note features a magnetic adhesion magic that sticks to any dry surface.

Depending on environment and sheet sizes, the statically charged sheet are able to last anywhere from one week to half a year. Meanwhile, you can move, replace or edit anytime. Unlike regular note sheets, Tesla Amazing magnetic note is recyclable and completely reusable on both sides.

Traditional way of tape measuring is obsoleted. We now have a better, neat, and elegant option for 21st century to calculate length, distance and even dimension. It looks and feels like a pen, it certainly is. By changing the tip, it can be pen, pencil or stylus in no time.

Synchronise with the mobile app, it utilised literally laser precision roll-over to pin-point any length and convert it into different units (m, cm, mm, in, ft, etc). The 01 pen is Built with proprietary gear and magnet sensor system, which allows to capture the 3D dimension of any object accurately and share it via smartphone.

Tying shoelace is not hard but an annoying task, especially when it tripped you over in your most important mission. Very often in sneakers or sport shoes, the shoelace just cant help itself but untying more than you can counts.

People are creative about shoelaces, recently we have Hickies Elastic clip-and-on, and Zubits Magnetic Shoe Closure, which both have their own advantages over the others.

This new product called QuickShoeLace is a stylish shoelace that launched on December 14 2016 on Kickstarter. It offers a simple way of one-handed quick tying off your shoelace by simply hook it to the metal pin. QuickShoeLace is available in many colors including neon’s, you can buy them from as low as $15, or $19 for a custom engraved logo from their early bird promotions.

Get ready for you next family/friends rubber bands gun war with Elastic Precision, a company that makes wooden guns (from hard rock maple tree) which loaded with rubber bands as ammo.

Not only safe and fun for both kid and adult, its distinctive craftsmanship makes wooden guns an excellent and artful collectables.

All guns are America-made with high quality and precision. They mainly produced 1911 pistol, PPK pistol, and MP 5 machine guns. Notably, the MP5 machine gun can shoot up to 24 bands at a time up at a distance of 30 feet away. If you are a big fans of gatling guns and cool looking rifles, there are a number of Amazon sellers are selling for the models at a affordable price too.

If you are not familiar with the tools, finding the right socket wrench for the correct nuts can be a big hassle. Instead of having many multiple-sizes wrenches, an ingenious product called Gator Grip by Endeavor Tool LLC is a professional grade universal socket wrench.

Unlike others, it has a spring-loaded pins intended to grab all kind of nuts, screws, bolts, or even a broken nuts.

Due to torque limitations, it may not be ideal for some heavy duties, but its more than enough for household repairing works and so handy that it can hardly be beaten. The socket fits 1 4″ to 3 4″ standard and 7mm to 19mm metric. It comes with 1 year warranty and is available on Amazon.com.

A lovely product for some people that have neurological related diseases which causes unintended rhythmic movement on any part of body such as shaking, rigid muscles, or losing of speech and balancing ability. Meanwhile, hand tremor is unexceptionally happening in those patients, making eating a difficult and frustrating process.

Liftware, famous of its anti-tremble spoon (Liftware Stable), has coming up with a new product called Liftware Level. This time, a better and improved version of the previous, to help people with limited hand movement eating with ease.

Regardless of twisting, the flexible joint maintaining at a steady and desirable angle. You can buy Liftware level starter kit now for $195, or get an extra soup spoon/fork attachment for just $35.

A tripod is the most essential accessory of taking a steady photo/video, same goes to our phone’s camera, which we used to lean against wall or heavy object while taking photos. Current tripods in the market is simply too bulky or not portable and flexible enough for smartphones.

Pocket tripod is a slim and foldable credit-card size tripod for smartphones. It is smartly designed (patented) to fit in your wallet yet reliable enough to carry your phone in most of the shooting occasions, landscape or portrait.

They ran a successful Kickstarter campaign on 2013 and received a lot of feedback. One of which is that the tripod is only working on iPhones. Thus this year on 2016, Pocket Tripod made a big shoutout for all smartphones out there. Even with their case on.

amasuite 5 from chris guthrie "to be released soon"

Protect Yourself With The Nifty Imossi Wallet

The Aesthetic Blade Nitro from Zinvo