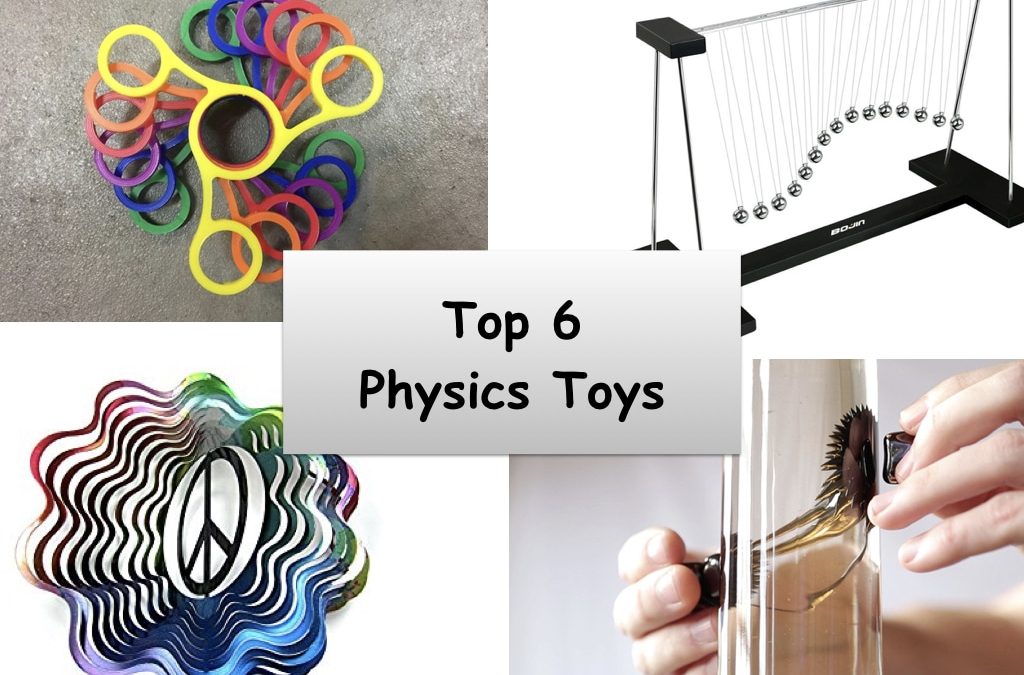 Science is not magic, but looks a lot like magic. While science toy is so cool and fascinating as a beautiful decorative artwork, but educative and fun enough for kids.

Some of the underlying physics gizmos explaining here are simple yet so science-defying and even took a while for engineers to figure out and understand.

You may not realised that even some of the famous magician uses scientific principles, or optical illusion, all the time behind the curtain of their stunning shows. Release your inner David Copperfield now and become a magician in the eye of physics with our list of top 10 cool science toys for 2016 and 2017.

Fidget ,or fidgeting, is a behaviour that most people found in common. One may involved in small movement like touching, tapping, clicking or stepping on the nearby object as a way of exhibiting nervousness and distress, which reduces anxiety at the same time. It can be observed frequently while one being strained to generate new ideas or in brainstorming.

While fidgeting is harmless, in fact, it has been proven to increase concentration. Here we have a cool desk top fidget toy for you called Spinpal. Instead of clicking your pen or tapping on random things, Spinpal offers a new way to fight your stress and anxiety.

It is a satisfying gyroscope by 3 heavy steel balls. The total weight is just 65 grams (2.2 oz). Built with a high precision bearing at its center, Spinpal is accurately engineered to spin for a long while.

Interestingly, the rotation is fast and so steady that allows hanging the center bearing with a string will stay side-spin afloat, gravity defying!

You can get their off retail price via the link below, each set is being sold for $22.50. To customise to fit your style, you can buy additional blade in multiple colors for $5 each.

A great garden dazing ornament to catch someone’s eyeball. This is metal reflective wind spinner by Shitpityourway. Hang it in patio, living room, hallway, or anywhere you like and watch it spins.

The ideas is simply cutting the steel plates and arrange in a way that reflecting the illuminations to manifest a 3D illusion-like hypnotising effect.

Coated to resist rusting and corrosion, the spinner is durable and designed to last long. It can be customize to pair with battery, solar power, or electrical motor for spinning in windless days!

A beautiful mesmerizing decorative for interior design. Made by nickel or copper plated metal, the swivel-binded steel wires goes downward in a spectacular spiral manner.

Two crystals attached to the upper and lower middle which gives a dazzling optical illusion, like its constantly climbing upward/downward. While rotating, the crystal prisms give off sparkles from reflecting the ray of light too.

It’s available in multiple colors (crystals and wires) and lengths (9″, 11″ and 14″). If you are interested, its now available in Amazon.com.

As you may heard of the well known Newton’s cradle, what about pendulum wave? It’s a set of 15  uncoupled metal balls connected by fine strings with increasing length hanging in a steel frame, and the outcome is stunning.

By swinging all balls at once towards the same direction with a provided wooden bar, you will be able to see all balls dancing in a wave form (and other patterns too), and soon later return back to a single line. This kinetic art takes advantage of perpetual motions of oscillation, learn more from Harvard University pendulum wave here.

Pendulum wave is cool, educative and fun to play with, instead of visiting museum for a larger demostration, you can have a miniature version on your top of your desk.

A sand timer in water column, or better known as Newton gravity glass timer, is an amazing hourglass that does not rising right away after you flipped it. Frankly speaking, that was mind blowing.

No fancy things here, both water and sand timer are normal, but not when you put them together. The inner hourglass itself is flexible, meaning it’s at least 2mm smaller in diameter than the tube. So how? People thought that it was the heat that generated when the sand falls, or some even said that was just an optical illusion!

The correct answer is because of the buoyancy placement either on top or bottom of the timer. When the tube is being flipped over, timer will then be located at the tube bottom, this makes top of timer heavier, or buoyant bottom in other words. Thus, the timer will try to flip over, which is not possible because it fits quite snugly to the tube, ended up caught itself in against of friction to the side of tube. Soon later after the sand goes down, the tendency of flipping is reduced (buoyant top), and the timer will go up gradually. Learn more from this article.

Although there are a number of hourglasses for sale in the market, we couldn’t get a suitable one that reaches our expected quality standard. Thus, we have decided not to give any direct link here. Instead, we suggest you to make one for yourself, as you will only need a regular sand timer, a slightly bigger cylinder tube that filled with water and a cover.

But if you still desperate to buy a floating hourglass puzzle, there are still plenty of moderate alternatives in Amazon.com and Aliexpress.com.

Ferrofluid is a liquid that containing dispersed nano-scale magnetic particle. When in the presence of magnetic field, the outcome is astonishing. It can be made at home easily by mixing the MICR Toner and vegetable oil in about 1:2 ratio, and there you go.

On 2015, a ferrofluid project by Inspired Designs has had a successful Kickstarter campaign with $88,470 dollars funded, far exceeding the $7,000 goal. Their flagship motion lamp, or “The Inspiration”, is a 450 ml display glass with 15 ml ferrofluid inside.

Similar to lava lamp, the glass makes ferrofluid blobs dancing up and down calmly when the power is on. By interacting multiple magnets together near the glass, the blobs changing in lots of cool patterns quickly, one of which is a neat spiky look.

Their second product, called “The Tinker”, is a much smaller version that held in a 120ml plastic bottle (3ml ferrofluid). It has a magnetised screw at the center, where the ferrofluid coils around elegantly.

The latest updates:
They launched a new Kickstarter campaign on Oct 2016. With some slight changes and renaming both of their product — The Inspiration to The Illumination, and The Tinker to The Nano. However remained the rest of aspects almost the same.

amasuite 5 from chris guthrie "to be released soon"