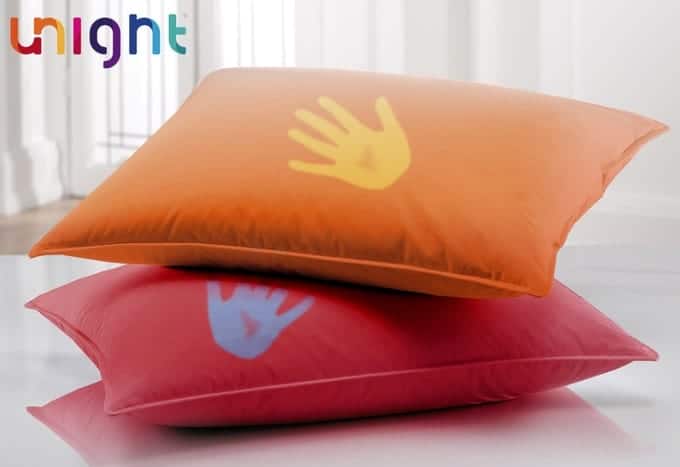 Any parent knows how much of a hassle getting kids ready for bed can be. No child wants to stop learning to code a Google Arcore project or looking up new images for their LED art frame just to go to bed. But a new company named Unight plans on making bedtime more fun, too.

Unight is attempting to kickstart the world’s first and only color-changing bedding. Using their patented, thermochromic dyes, Unight bedding reacts to changing temperature by changing its color. Merely putting a hand on the material can instantly cause the bedding to change to a completely different color.

Available in a variety of colors, Unight’s prototypes are durable, safety-tested, and washer safe. But they need support on kickstarter to come to market.

Kickstarter, for those who don’t know, is a crowdfunding site where companies or individuals with great ideas can ask for funding from everyday people. If Unight makes their funding goal by December 6, backers who support them will get bedding sheets and pillowcases based on how much they contribute. The goods probably won’t be shipped until somewhere around January 2018, but they’ll ship to anywhere in the world.

If Unight doesn’t make their funding goal, no money is ever taken from any of the backers, and these color-changing sheets and pillow cases might never see the light of day. That’s right, this is the best chance for bedding like this to become commercially available.

So far Unight has only announced plans on releasing thermochromic pillowcases and sheets, but who knows what the future may bring.

This is definitely something I think my own kids would love; a brilliant idea for a Christmas present. I have always thought that soft presents were boring but Unight is about to challenge this belief, for good!

Kaisr Original - Your Key to a Comfortable Lounge

Top 5 Awesome Inventions of the Week