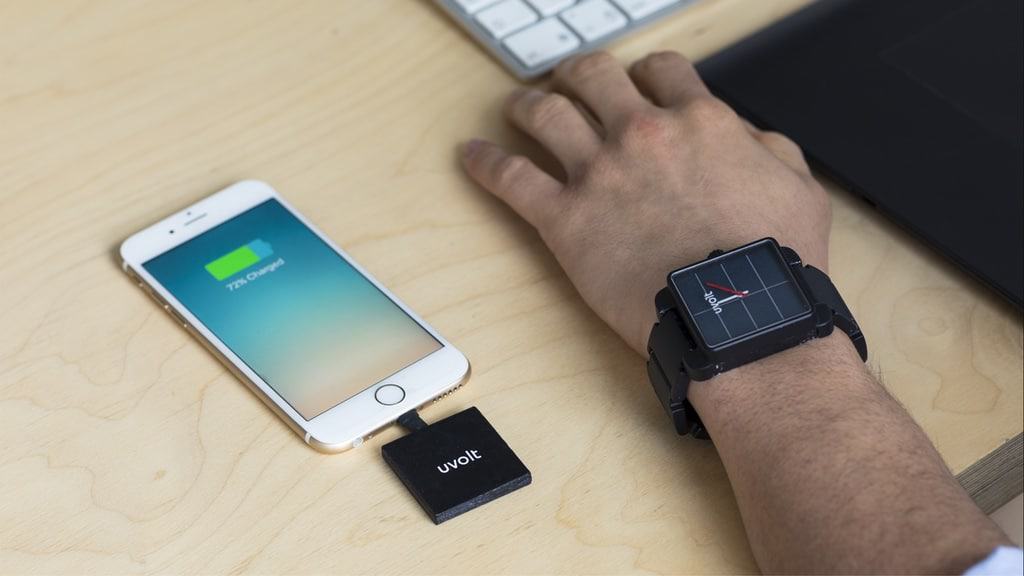 We love our smartphone, but charging them has long been a hassle ever since the first smartphone came out. Back then, non-smart cell phones are generally consume lesser power, and therefore we can use it for days before charging. For now however, we must charge our smartphones once, if not, a couple of times in just a day. That doesn’t bother light mobile phone users much (occasional browsing/check email), but for heavy mobile users (watch videos/play games), it means that they must carry an external battery pack 24/7 for good.

It may sounds ridiculous to carry an extra battery pack to use your phone, while the phone itself has already built with one inside. Certainly, there must be a better way.

In recent years, along with the waves of improved solar charging’s efficiency, people have made cell phone cases integrated solar panel in the market. However, the downside is still due to the poor <20% conversion efficiency which make solar charging a thing of hours (more than 2 hours under sunny day). No one’s gonna stand under the sun for that long anyway. Regardless of environmental benefits,  speed still matters.

One good example, Yolk solar paper, the thinnest and lightest solar charger without compromising a modern look. It stood out from most of the other solar chargers in the market, which are often bulky and unfeasible to use in life.

In contrast, speed charging is on the hottest trend in these few years. A number of crowdfunding projects have emphasised on their crazily quick power bank charging capability. One remarkable example is Simpiz. The company claimed to fully charge your 9000 mAh devices in just 18min, which is also means 5 min for your iPhone 6s, 8min for Samsung Galaxy, 15min for iPad Air 2. Although it doesn’t have monstrous capacity of 50 000 mAh like Maxoak, but it does have a normal 9000 mAh which is enough for more than 4 times of fully charging an iPhone 7.

With all that information mentioned above, the gadget for today is going for a different approach, on your wrist — watch. Even if you’re not a watch collectors/lovers, it will still stun you.

Uvolt Watch – Solar and wireless charging for your phone

Uvolt is a simple analog watch that built with solar panel. It allows passive charging of the removable battery in the watch, and replenish some juices for your phones when needed. Also, Uvolt offers an active charging via wireless charging dock under 45min, if you’re in a hurry. The cool part, it optimises the space by using the hinges as part of the power storage too.

An excellent feature from Uvolt is that, each removable power unit has its own integrated cable for phones. So, you literally don’t need to carry cables for it to function. The power unit comes either with lightning port for Apple devices, Micro USB or USB-C for Android devices. Moreover, if your phones support wireless charging, Uvolt can even charge your phone in complete wireless too.

Uvolt watch features a wireless active charging (support any wireless charger) like usual, as well as passive charging through the solar panel. The solar panel captures energy from the sun (sunny and overcast days) and normal lightings in the room, and turn it into useful energy source for your devices. The capacity of Uvolt removable battery is 600 mAh, which is only about 30% of an iPhone 7 (1960 mAh), and therefore Uvolt is meant to be a source of wearable emergency and does not replace the regular charging.

As we mentioned above, poor solar charging conversion efficiency (~21% in ideal condition) makes it usually takes more than a few days to fully charge up the battery unit. For that, the company says it could be charge up in a sunny day. Also, for wireless power reserve, there is a 30% energy loss normally.

On the other hand, both cabled and wireless Uvolt power units take about 45 minutes to regain (recharge) their power. For discharge, it is 30 minutes for cabled’s; While 45 minutes for wireless’s. In general, the amount of battery capacity gives you:

The hinges of Uvolt is another core value of this gadget. Although you couldn’t take every single hinge out for separate use, but it will automatically convert its energy to the main removable power unit in 45 minutes. When the main power unit is full, it will slowly store up in the hinges for later use. And when its done charging, you may then take it out for some extra juices for your phone. Only the first 2 segments of the hinges contain batteries, the rest can be removed or replaced.

Uvolt is now on Kickstarter starts at only $99. For early backers, you can enjoy a discounted price up to 55% off future retail price. The link below will bring you to their official Kickstarter campaign page.

This product is not available yet on online retail stores such as Amazon and eBay.

The Aesthetic Blade Nitro from Zinvo